Ash Cave is the largest recess cave east of the Mississippi and perhaps the most awe-inspiring feature of Hocking Hills State Park. With a horseshoe-shaped rim that spans 700 feet, with a runoff waterfall, Ash Cave is enormous and open on one side. It’s the southernmost of six natural areas that comprise Hocking Hills State Park, and is a must see for all visitors looking to experience Ohio caves.

Situated on a high outcropping of Black Hand sandstone, Cantwell Cliffs is in one of the most remote areas of Hocking Hills State Park, and offers hikers the best of two worlds. The high rim trails offer far-reaching vistas of breathtaking beauty, while the valley trail makes the visitor feel diminutive when walking at the base of the cliffs.

Cedar Falls has the greatest volume of water of all the falls in Hocking County, with water plunging 50 feet. It’s easily the most photographed of waterfalls in Ohio. The name Cedar Falls is a misnomer — the result of mistaken identity. Early settlers to the area misidentified the stately hemlock trees as cedar trees; but the name Cedar Falls has been used ever since. 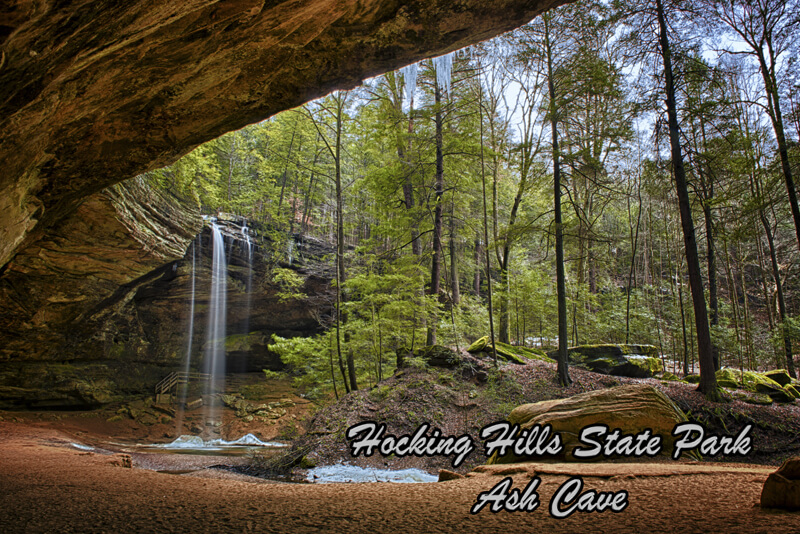 A State Nature Preserve since 1977, Conkle’s Hollow’s sheer cliffs of Black Hand sandstone rise nearly 200 feet above the valley floor. The deep, cool gorge, which is only 100 feet wide in places and is considered by some to be the deepest in Ohio, has numerous waterfalls cascading over its sandstone cliffs.

Lake Logan was developed by the Ohio Department of Natural Resources in 1955 for recreational purposes. It’s now one of the finest fishing lakes in Ohio. Lake Logan sports northern pike, bass, bluegill, crappie, catfish and saugeye. This day-use park provides scenic picnic and swimming areas, as well as secluded walking paths where visitors enjoy the wooded beauty of Ohio’s hill country and this Hocking Hills Park.

Old Man’s Cave is the most visited area in Hocking Hills State Park, featuring rock formations with names like the Devil’s Bathtub, Sphinx Head, Eagle Rock and Whale in the Wall. It was named for the rock shelter that was once the home of Richard Rowe, a 19th-century hermit who is said to be buried beneath a cave ledge on the premises.

The only true cave in Hocking Hills State Park, this grand tunnel-like corridor is situated midway up a 150-foot cliff of Black Hand sandstone. The cavern features natural cut-outs which look like windows. Used by Native Americans for turpentine stills, by pioneers for animal shelter, and even by criminals for a hideout, Rock House has a colorful history.

Rockbridge’s natural arch or bridge is more than 100 feet long and 10 to 20 feet wide, and gracefully arches 50 feet across a ravine. It is considered the largest natural bridge in Ohio. There’s a parking area and a 2.75 mile trail system to the natural rock bridge. 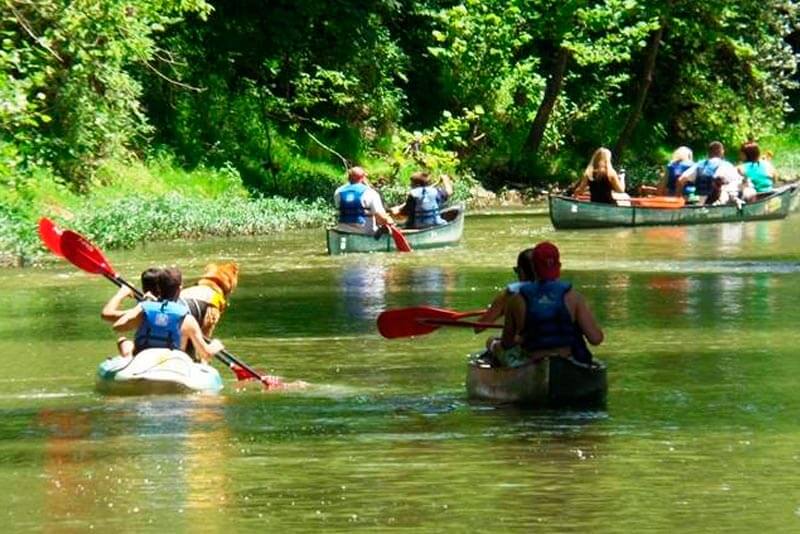 Enjoy one of Ohio’s most scenic rivers located in the beautiful Hocking Hills by treating yourself and your family to a leisurely trip down the Hocking River in Logan, Ohio. Your outdoor adventure is available by canoe, kayak or raft.

They take great pride in offering visitors to the Hocking Hills a chance to discover the scenic beauty of the region from the unique vantage point inside a canoe, kayak or raft.

Hocking Hills is home to many exciting outdoor adventures, but nothing compares to the thrill of our Zip line Canopy Tour!

Fast, fun, and exhilarating, this 2 1/2 to 3 hour spectacular adventure offers nature lovers and thrill seekers alike, ages 10 and up, the unique opportunity to zip through the treetops on a network of cables and adventure skybridges suspended high above the forest floor, overlooking a cave, rock cliffs, the Hocking River, and other nature flora.

Upon arrival, our friendly and experienced guides will give you a detailed safety and equipment orientation before you are fitted with your personal gear for the tour. You will also have the opportunity to actually zip on a low training cable to practice the techniques that you will be using on the tour.

Your adventure then begins! We will transport you along a 1.5 mile scenic nature trail to the beginning of the course where the Mighty Oak awaits your arrival. You will complete 10 Zip lines, traverse 5 adventure skybridges and rappel back to ground level at the finish line.

While waiting between each zip you will enjoy amazing views from the observation platforms. Your guides will point out interesting highlights of the area, including native vegetation, geology, animals, as well as local history.

For thrill-seekers and nature lovers alike, it’s the perfect adventure for families, couples seeking to escape the fast-paced city, or adults looking for something new. Designed for guests who are in reasonably good health, our Zip line tour is sure to thrill first-time zippers as well as the most experienced Zip line enthusiasts.

So don’t miss this unbelievable experience during your visit to the Hocking Hills area! 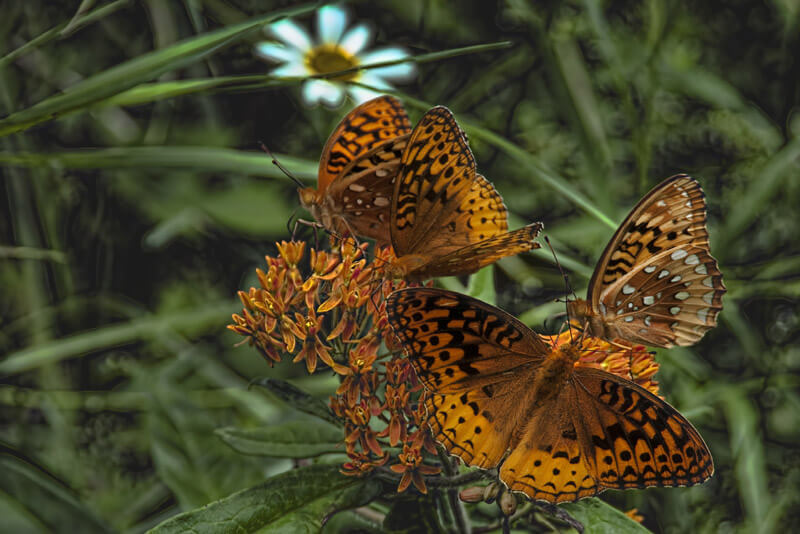 The Hocking Valley Scenic Railway is a non-profit railroad. Its mission is the preservation, restoration and operation of historic railroad equipment for the education and entertainment of the general public. All trains are run by volunteers who are members of the railway.

Founded in 1972, Hocking Valley Scenic Railway offers diesel-powered rides aboard vintage equipment. Take a leisurely ride back in time along the Hocking River and through the rolling hills of Southeastern Ohio. Choose between seating in our 1920s commuter coaches, open air cars (weather permitting), 1940 air-conditioned B&O coach or an air-conditioned bi-level car built in 1970. Our primary diesel locomotive, GP7 No. 5833, was built in October of 1952.

The route we operate over, between Nelsonville and Logan, was once a part of the original Hocking Valley Railway’s Athens Branch. The railway merged into the Chesapeake & Ohio Railway in 1930. The Hocking Valley Scenic Railway was able to purchase the current route in 1985, as C&O sold off some of its less-used track.

To learn more about other railways, you might want to visit www.american-rails.com

Millstone BBQ, your Hocking Hills restaurant destination. We’re located in Logan, Ohio, in the Heart of Southeastern Ohio’s Hocking Hills region. Our Southern Smoked BBQ meats are all smoked on site for fifteen to seventeen hours. You will notice a pink hue inside called the smoke ring. This unique trait is indicative of our moist, tender BBQ meat that virtually melts in your mouth. Our goal at the Millstone is that you’re greeted warmly and that you go home with a satisfied smile. We hope that our service, fun atmosphere and unique flavors will call you to visit again and again. 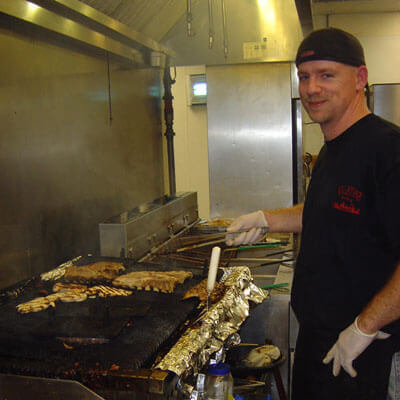 WATCH OUR 30 SECOND VIDEO at http://www.youtube.com/watch?v=W37FkT6GVeA

RESERVATION POLICY: We are taking reservations Monday through Thursday. Friday, Saturday, and Sunday are first come first serve no matter the size of the party.

HOLIDAY RESERVATIONS AVAILABLE – Planning a holiday party but don’t know where to hold it? We’re now taking reservations for parties of eight or more. We can even cater it at your location.

There's Still More To Do!

If you are staying with us and are looking for information on things to do follow some of the links below to find Hot Deals, Coupons and information on and about Hocking Hills.

Looking for a Massage in your Cabin? Visit Blue Valley Massage 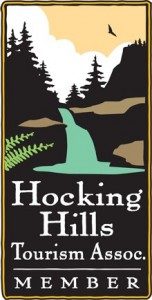 The Hocking Hills’ #1 shopping destination!
www.hockinghillsmarket.com
A Unique Shopping Experience! Whether your looking for a unique antique to
pull the room together, a new pair of boots, or anything in between, we’ve
got you covered …